(CBS) — Elon Musk’s tetchy mood of late is unlikely to be lightened by the latest report of a Tesla crash.

The Laguna Beach, California, police department said Tuesday a sedan made by the electric-car maker was in Autopilot mode when it crashed into one of its cruisers. The officer wasn’t in the vehicle at the time of the incident, according to a tweet by the department. The Tesla driver, identified only as a 65-year-old man, sustained minor injuries.

This morning a Tesla sedan driving outbound Laguna Canyon Road in “autopilot” collides with a parked @LagunaBeachPD unit. Officer was not in the unit at the time of the crash and minor injuries were sustained to the Tesla driver. #lagunabeach #police #tesla pic.twitter.com/7sAs8VgVQ3

Tesla (TSLA) has faced scrutiny in recent months for several accidents involving its cars, including instances where drivers had engaged the vehicle’s Autopilot system. The crashes have been linked to two deaths and one injury, leading consumer groups to call for an investigation into the technology.

In one of the incidents earlier this month, a Tesla Model S in Autopilot mode hit a stopped firetruck in Salt Lake City, Utah. Car data taken after the crash showed that the driver, who suffered a broken ankle, did not touch the steering wheel for more than a minute before the crash. The 29-year-old motorist also told police she was checking her phone to compare different routes at the time of the accident.

Tesla has warned that its Autopilot system doesn’t prevent all accidents. 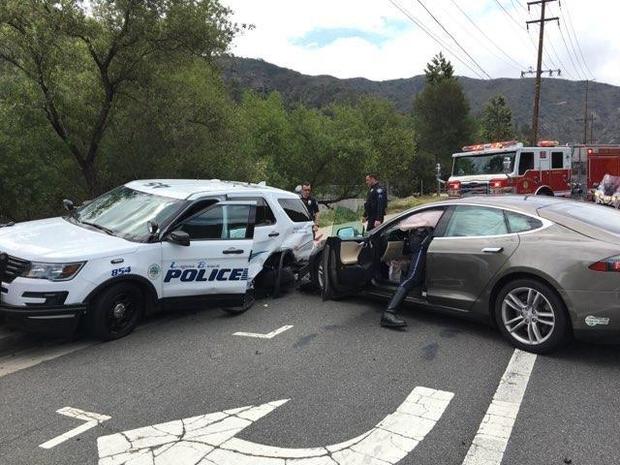 “When using Autopilot, drivers are continuously reminded of their responsibility to keep their hands on the wheel and maintain control of the vehicle at all times,” the company said in a statement after Tuesday’s crash. “Tesla has always been clear that Autopilot doesn’t make the car impervious to all accidents, and before a driver can use Autopilot, they must accept a dialogue box which states that ‘Autopilot is designed for use on highways that have a center divider and clear lane markings.'”

Musk last week accused the media of “holier-than-thou hypocrisy” and of misrepresenting the truth, while also saying he planned to launch a website where users can rate the credibility of journalists.

The CEO’s attack followed reports that raised questions about Tesla’s Model 3, which the automaker is counting on to help it crack the mass market. Production of the vehicle is behind schedule. After Consumer Reports declined to recommend the car, Musk last week acknowledged the Model 3 has braking problems and promised to fix the issue.