(CBS) — Researchers in Massachusetts believe they may be on the brink of creating a revolutionary non-addictive painkiller. Developed by Blue Therapeutics, Blue-181 could be a big step forward in dealing with the growing opioid crisis.  The team there said it wanted to make a drug that is a total replacement for the opioids currently on the market – something that people could safely stop using without the possible dangerous side effects.

Mark Loccisano felt a gratification from painkillers with his very first pill. They were prescribed by a doctor for a sports injury. It was the beginning of an opioid addiction that consumed his 20s and nearly cost him his life, reports CBS News’ Kenneth Craig.

“Not many people know they’re addicts until they start using,” Loccisano said. “I ended up wrapping my work truck around a telephone pole one night, on my way home from work….And that wasn’t even enough for me to stay clean.” 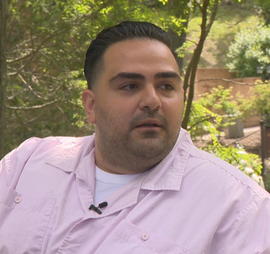 Loccisano is now in treatment at St. Christopher’s Inn, which is run by a ministry of the Franciscan Friars of the Atonement in Garrison, New York. He’s part of a staggering number of Americans swept up in the nation’s opioid epidemic.

“We were told the same thing about the painkillers currently on the market – that they were non addictive, that there’s no risk for dependency, and look where we are now,” Craig asked Ajay Yekkirala, cofounder and chief scientific officer of Blue Therapeutics.

“The onus is really on all of us to make sure that the scientific rigor is maintained,” Yekkirala said.

The team at Blue Therapeutics is part of the pharmaceutical race to find powerful opioid alternatives. They believe the answer lies in their molecule Blue-181. It works by clinging to a different receptor in the central nervous system than opioids, eliminating the narcotic high, abuse and dependence risks.

“It targets receptors in the spinal cord where you are able to reduce the perception of pain, without targeting the areas of the brain which leads to the addiction side effects,” Yekkirala said.

Several other biotech companies, as well as researchers at universities, are working to develop similar drugs, with different approaches. Blue is preparing for its first clinical trial, but the compound hasn’t been tested in humans yet.

“It takes a long time to really know all the long-term effects and really to prove that something has no risk of addiction over time,” said Dr. Robert Griffin, who specializes in pain management. 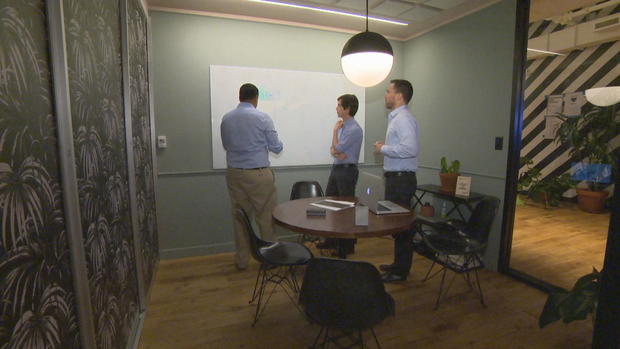 Three of the Blue Therapeutics scientists behind Blue-181  CBS NEWS

Blue-181 is backed by more than $2 million in funding from the National Institutes for Health and the Department of Defense, which sees Blue-181 as promising for injured veterans especially vulnerable to addiction and overdose.

“I think the opioid epidemic, the main driver of it, is the fact that a lot of us are in pain. And if we don’t give effective painkillers, we’re never going to solve the problem,” Yekkirala said.

Blue Therapeutics says it could be five years or so before the drug makes it through clinical trials to see if they confirm its claims. The National Institutes of Health and PhRMA – a trade group that represents U.S. pharmaceutical companies – both say they are also working to fund and develop non-addictive opioid alternatives.