(CBS) — A second person charged in connection with the slaying of a transgender teenager in southwest Missouri has pleaded guilty. CBS affiliate KOLR reports 25-year-old James Thomas Grigsby, of Thayer, pleaded guilty Tuesday to abandonment of a corpse. Grigsby was accused of helping three other people dispose of the body of 17-year-old Ally Steinfeld, of rural Texas County, Missouri, in September 2017. 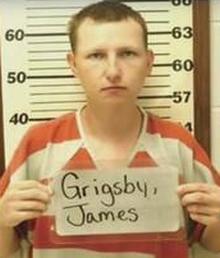 Steinfeld’s mutilated and burned remains were found in September in Cabool, about 70 miles east of Springfield.

Investigators say she was stabbed several times, including in the genitals. Her eyes were gouged out and her body was set on fire. The Texas County sheriff and prosecutor say have insisted the killing was not a hate crime, but it drew attention of transgender advocates and others across the U.S. who believe Steinfeld was targeted for her gender identity.

According to court documents obtained by KOLR, Vrba allegedly tried to kill Steinfeld with poison, but the victim would not consume the substance, so he fatally stabbed her. He also allegedly bragged to friends about the slaying.

Calderas is accused of assisting in the murder and disposal of the body, KOLR reports.

Three suspects in the death of Ally Lee Steinfeld  KOLR

Another person charged – Isis Schauer – pleaded guilty to second-degree murder in December and was sentenced to 20 years in prison.

Steinfeld had been began dating Calderas, the victim’s mother has said, and the couple had been living at Calderas’ mobile home with Vrba and Schauer.