(CBS) — A father in Riverside, California, is facing charges after allegedly swinging his young son around like a weapon, then dropping him. The incident was caught on a neighbor’s surveillance camera, which helped lead to the man’s arrest.

The father, identified as 27-year-old Techhoak Danny Lim, was apparently having an argument with his girlfriend, CBS Los Angeles reports. The surveillance footage appears to show the man grabbing his 18-month-old son and swinging him around to hit the woman — “almost like a baseball bat,” one Riverside police official said. Then the video shows him dropping the toddler to the ground.

He also drops the child in a second video, caught on a camera positioned at a different angle. 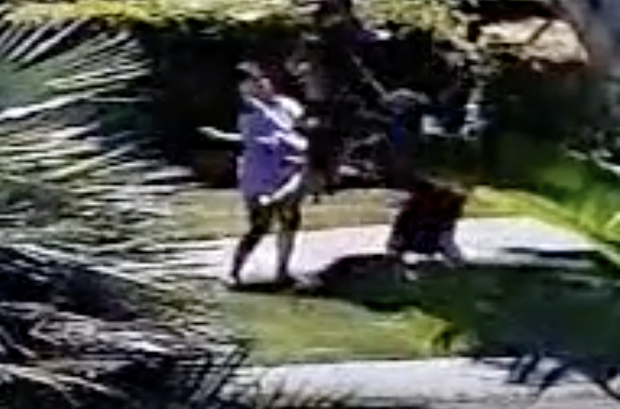 The disturbing video shows the man swing his son at a woman, as if the child were a baseball bat, then drop him on the ground  MICHAEL OGDEN

The incident happened last week and was caught on Michael and Christy Ogden’s home security camera.

“It was horrible to watch,” Christy Ogden said. “Especially since we didn’t know what was going on until after the fact, so it wasn’t like we could have stopped it,” she added.

She ended up sharing the footage on Facebook, where it got the attention of a local police officer. That officer went to the neighborhood to look for the suspect, and found and arrested Lim, who authorities say admitted to part of the act. He’s now facing charges of child endangerment with great bodily injury, CBS Los Angeles reports.

Lim took the officer to his home so he could see his son, who was then taken to a hospital and found to have only suffered cuts and bruises. The child is now in the custody of his mother. Lim has been freed after posting $50,000 bail the day after his arrest.