CHICAGO (CBS) — With each leap and landing, each twist and turn, 10-year old Ava Blaser tells an amazing story: her own.

“[Dancing] gives me something to look forward to, like during treatment,” Blaser told CBS News.

“She’s getting several days of really heavy chemo that makes most people really nauseated and really exhausted,” Reichek said. “The fact that this kid leaves the hospital and goes to dance class is unbelievable.”

Blaser was diagnosed with cancer in both kidneys when she was 3. Her left kidney was removed along with part of her right. After treatment she was declared cancer free in 2012.

But then in January, the cancer returned. Two operations followed, plus a current round of chemo. Yet she’s not letting a little thing like cancer slow her down.

“I just kind of push myself,” Blaser said. 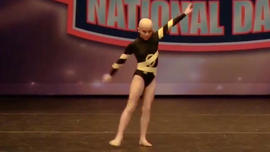 She won a dance competition three weeks after surgery and a second one with her sister Emma in May. She had chemo just yesterday, but said she’d be dancing on Saturday and heading to Hollywood for an award show next week.

Her doctors think Blaser’s cancer is curable and her family is hopeful.

“I expect the best outcome, but I have to let her live her life,” Ava’s mother Angie said.

For now, Blaser wants to live doing what she loves.

One gesture Blaser does at the end of her routine — taking off a ribbon — caught our attention.