(CBS) — There was a horrifying attack Thursday in Yemen — a Middle Eastern country torn apart by a 3-year-old civil war. An airstrike in the north reportedly killed at least 50, more than half of them children.

The world has forgotten Yemen’s bloody war, but when you look at these young victims — their tiny bodies, some still struggling for life — you won’t be able to forget them.

The children were reportedly on a field trip, when their bus was hit by an airstrike. Video footage, which CBS News can’t independently verify, appear to show the devastating aftermath.

The strike was carried out by the Saudi Arabian-led coalition, which is backed in this war by the U.S. 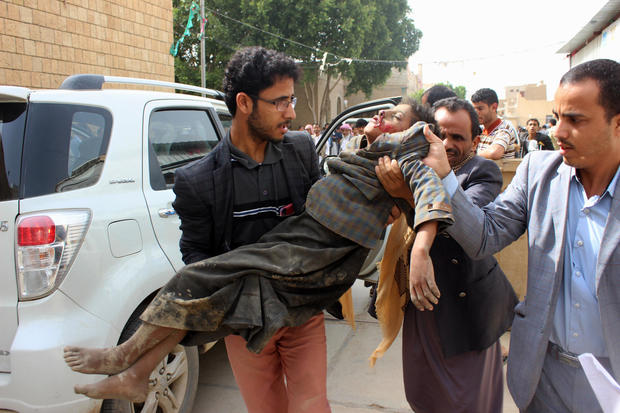 A Yemeni child is transported to a hospital after being wounded in a reported airstrike on the Iran-backed Huthi rebels’ stronghold province of Saada, on Thu., Aug. 9, 2018.  GETTY

CBS News was witness to Yemen’s war first hand in February as Saudi-backed soldiers were seen fighting against Houthi rebels for control of the country’s barren hills.

There was a loud boom nearby while covering the story.

There has been brutality on both sides. More than 10,000 people have been killed in three years of war, according to the United Nations. A Saudi Arabian blockade has contributed to starvation and disease while a U.N. report found the Saudi-led bombing campaign — carried out with U.S. support — has hit schools, even weddings.

And then Thursday that bus full of children, victims too young to understand why their country is at war.

A State Department spokeswoman expressed concern over the airstrike, and called for the Saudi-led coalition to investigate.