(CBS) — President Trump on Friday said the June 12th summit in Singapore with North Korea is back on, after meeting with top North Korean official Kim Yong Chol for more than an hour in the Oval Office. “We’ll be meeting on June 12th in Singapore,” the president said Friday, one week after canceling the summit.

Mr. Trump made the announcement, he said, without first opening a letter written to him by North Korean leader Kim Jong Un delivered to him by Kim Yong Chol, the highest-ranking North Korean official to visit the White House in 18 years. Mr. Trump, speaking to reporters after the meeting, still called it a “very nice” letter.

“That letter was a very nice letter. Oh, would you like to see what was in that letter,” the president teased the press.

But pressed further about the content of the letter, Mr. Trump admitted he hasn’t opened the letter yet, and said he could be in for a “surprise.” The White House later confirmed that the president did read the letter later Friday afternoon.

Mr. Trump called off the summit last week, a move a White House official attributed to North Korea’s “trail of broken promises.” But Mr. Trump has expressed more optimism since then, suggesting in the last week the summit could still happen June 12th.

On Friday, Mr. Trump also said he no longer wishes to use the term “maximum pressure,” which is how the administration has been describing the U.S. approach to North Korea. He doesn’t plan to introduce new sanctions. One day, Mr. Trump said, he hopes he can get rid of sanctions squeezing North Korea’s economy. 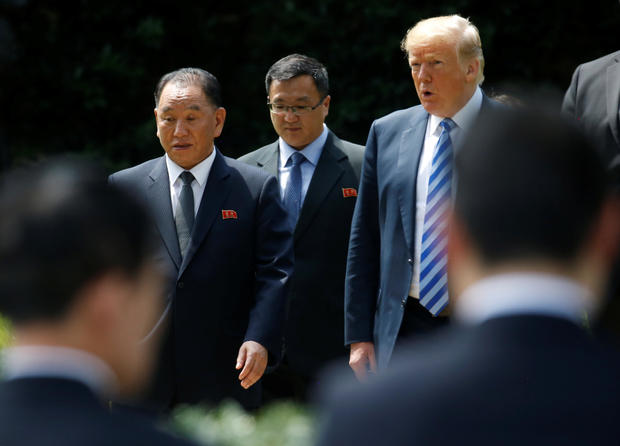 North Korean envoy Kim Yong Chol talks with U.S. President Donald Trump as they walk out of the Oval Office after a meeting at the White House in Washington, U.S., June 1, 2018. LEAH MILLIS / REUTERS

On Friday, Mr. Trump called the meeting with Kim Yong Chol a “good start.” He said the June 12th summit may just be the beginning of talks, and that working towards denuclearization may take more than one conversation or meeting.

“I never said it goes in one meeting,” Mr. Trump said. “I think it’s going to be a process but the relationships are building and that’s a very positive thing.”

“Yeah, I think so. He’d like to see it happen,” the president said.

Kim Yong Chol met with Pompeo Wednesday night and Thursday in New York, and Pompeo was cautiously optimistic about any future negotiations.

“It will take bold leadership from Chairman Kim Jong Un if we are able to seize this once-in-a-lifetime opportunity to change the course for the world,” Pompeo said Thursday. “President Trump and I believe Chairman Kim is the kind of leader who can make those kinds of decisions. And that in the coming weeks and months, we will have the opportunity to test whether or not this is the case.”