(CBS) — The battle continues against wildfires across the West, which have destroyed dozens of homes in California alone. On Friday, the flames raced down the hillside so quickly that Ishu and Laura Rao had no choice but to flee with their two girls, leaving behind one priceless possession.

The couple married just eight months ago. Laura says she knew exactly where she left her ring.

“I leave it in the same spot, above the bathroom sink in this little dish,” she said.

When the couple returned to the ashes two days later, Ishu used pipes sticking out from the rubble to guide him, and while the diamonds were gone, he found the ring.

“I was looking at the ring and there she was, so I just dropped down on the knee and proposed and said ‘Will you marry me?’ and she said yes,” Ishu said. 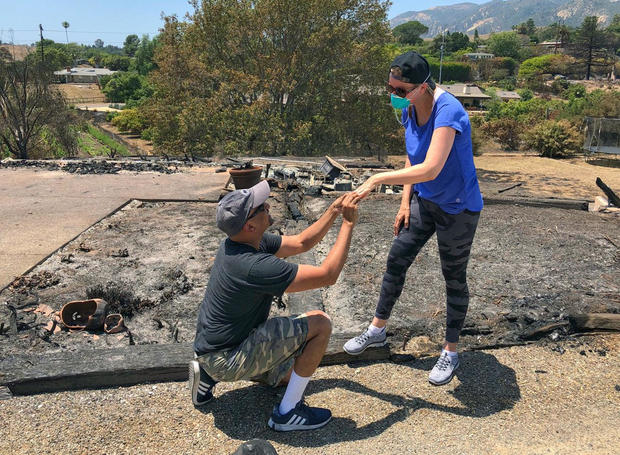 In this photo provided by the Santa Barbara County Fire Department resident Ishu Rao on one knee, places this wife’s wedding ring on her finger, next to the charred remains of their home in Goleta, Calif., Sunday, July 8, 2018.  MIKE ELIASON / AP

A firefighter who was helping them search snapped a photo of the moment.

“It was beautiful, it was so unexpected,” Laura said.

“We don’t look at it as a charred remnant of what could have been. We look at it as hope and prosperity of what’s going to be,” Ishu said.

It’s a moment made more significant by what they revealed on Monday: Laura is eight weeks pregnant, marking another new beginning.

“We’re going to make everything good out of this,” Ishu said.